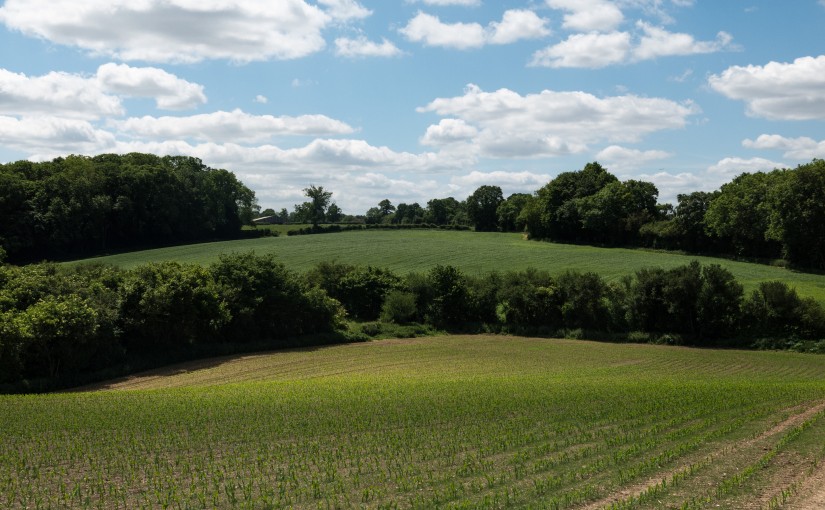 Here is a typical English rural scene. It’s early June, the sun is shining, the crops are growing, the footpath skirts the edge of the field, and there is almost nobody about – except a small group of teenagers who have just gone past trying, not altogether successfully, to get their heads round orienteering.

The only slightly odd thing about it isn’t apparent from the picture. This farm is not in some bucolic shire, it’s in Greater London, just 17 miles as the crow flies from Trafalgar Square.

As a Londoner, I think that’s fantastic. I get to go for long walks in the country without going out of range of my oyster card. But it’s also a bit odd. Astonishingly (at least to me), 10% of the land area of Greater London is used for agriculture, with a further (in)decent chunk (or so it feels from walking around and across them) taken up by golf courses. For a city facing acute shortages of affordable housing, that might look like a solution waiting to be seized. But as a post in CityMetric which prompted this reflection notes, the London Assembly Planning and Housing Committee concluded something very different:

There is a good case to be made that commercial agriculture is one of the best and most productive land uses in the Green Belt. The benefits include: opportunities for local job creation, skills development, regeneration, preservation and management of green space, potential for waste management, providing healthy locally produced food and so reducing food packaging and food miles, and the potential for improving food security.

So as ever, there are costs and benefits. I reap some of the benefits (and part of the benefit is that there often seems to be very few other people interested in sharing them) but incur none of the costs. So who is paying for my enjoyment?

One answer is everybody – this is a consequence of a green belt policy and so is a collective self-denying ordinance not to allow alternative uses for the land. There is apparently strong popular support for the policy – but then this is a near perfect example of a policy where a small number of people capture a very large share of the benefits (people who live in or near the green belt) and a much larger number of people share the costs (people whose housing choices are constrained or journeys to work elongated); the first group find it much easier to defend their shared interests than the the second.

Another answer therefore, is that the cost is carried by everybody who could make better use of the land but is prevented form doing so.  The people who would live in the houses which cannot be built are quite literally not in the picture. That leads to suggestions such as the observation by the Adam Smith Institute that a million homes could be built within walking distance of stations in the green belt and in doing so take up only 3.7% of the total area – met unsurprisingly with an equally strong rejection from the Campaign to Protect Rural England (and that such a campaign would concern itself with the rurality of the world inside the M25 is itself cause for reflection).

It seems pretty clear that we are not going to run out of land any time soon – not even of land close to major urban areas. The enjoyment of that land may not have a direct monetary cost, but its preservation does have consequences.

While the arguments continue, I will keep on walking, hoping as I go that if anything is to be built on, it’s the golf courses which go first.