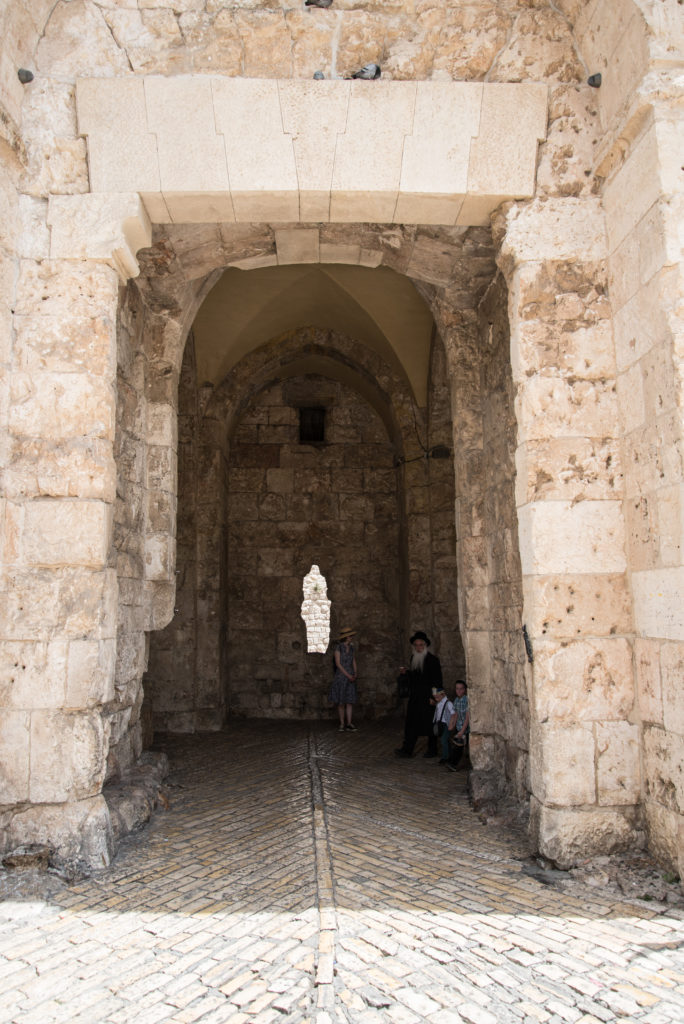 Some random reflections from a visit to Israel. They have all the depth and insight you might expect from a tourist flitting round the country for a week.

Trying to do things in a country where you don’t speak or read the language is one thing. Trying to do things in a country where you can’t read the script is something else again. Mostly the frustration is superficial – there are plenty of multilingual signs and plenty of people who speak at least some English, though both have an unnerving habit of fading away when they are most needed. But it’s real enough to bring home how hard the world is to navigate for those who are actually illiterate and how often the apparent modernisation and simplification of services can add to the problem, rather than reducing it.

Petrol pumps, it turns out, are an unhelpfully great example both of that and of the extent to which it is possible to spend time and energy trying to solve completely the wrong problem. We were on our second hire car, the first having broken down, and the second showing all the stresses of the 65,000 km it had already clocked up. Confidence was not high. But petrol needed to be bought, so off we went.  The first pump at the first petrol station refused to start.  The attendant motioned us to a second pump. That wouldn’t give us any petrol either. The attendant indicated that the problem must be with the car, some kind of blockage in the pipe to the tank. That seemed unlikely – the car was well worn, but the tank had been full when it was delivered to us, and the petrol must have got in somehow. So we tried another petrol station. Same result. That did seem to suggest that it was the car rather than the pumps which was the common factor. The prospect of needing a third hire car in three days loomed.

But the problem wasn’t the car at all. It was the fact that Israeli petrol pumps only like Israeli payment cards, combined with the fact that Israeli petrol pumps are both highly sophisticated and have instructions only in Hebrew. The answer, it turned out, was to pay in a different way. That’s probably more than enough wearisome detail (though that’s the simplified form of the story), but there is a moral. A small error in initial diagnosis led to the search for solutions being completely misguided; a bit more initial thinking about the set of things which might have gone wrong (and their relative plausibility and probability) might well have got to the right problem and the right solution much more quickly. And that wasn’t caused by stupidity (I like to think) but by a dangerous combination of over-weighting early indicators followed by the path dependence which came from them.

Back on the road, it was time to re-engage with Israeli traffic. I had read some fearsome warnings and there were indeed some slightly hair-raising practices. Drivers swap lanes with gay abandon, squeezing into gaps which don’t really exist, signalling their intention well after committing to the manoeuvre, if signalling at all. Bus stops – and stopped buses – appear without warning even on the fastest roads. Speed limits seem largely notional. The road signs are mostly tri-lingual, except at the occasional critical moment when they aren’t.

It could all have been terrifying. But it mostly wasn’t. That’s because although some of the behaviour seemed mad by sedate northern European standards, it was pretty systematically mad. Drivers had clear norms about how they drove and how they expected those around them to react. The fact that those norms were tacit and informal didn’t make them any the less real.

The trick wasn’t necessarily to drive in the style favoured by many of the locals. But it definitely was to learn to read the road through their eyes and so to have a sporting chance of anticipating what might be about to happen.

The battery in my camera was nearly flat. That was OK, I had a spare. The spare proved to be only half charged. That was OK, I had brought the charger. Except that it turned out that I had brought the charger for a different camera. So the challenge was to buy a new charger, or failing that a new battery. Initial googling was far from promising. The only realistic chance was going to be a fairly large and fairly specialised shop and there didn’t seem to be many of those at all, still less anywhere we were going. But there was a place listed as a dealer by Nikon, just a few minutes walk from the hotel we were to be staying at in Jerusalem.

Initial impressions were not good. What had looked like a small shopfront on a main street became a narrow passageway through an unprepossessing courtyard with a small room at the back, which contained a large photo printer, a friendly looking man, an air of general clutter – and no visible stock of camera equipment at all. There was no chance of such a place having the battery I needed. But the friendly man wanted to be helpful, so I told him what I was looking for. Without batting an eyelid, he turned to the shelf behind him and picked up the right battery – which as far as I could see was also the only battery.

The history of Israel is complicated, to put it mildly, More perhaps than anywhere else in the world, religions and empires are piled up one on another, with patterns of dominance shifting, sometimes over centuries and sometimes over days. I can offer nothing on the unravelling of that. But it does prompt a couple of more general thoughts.

The lesser one is the value of rules as a way of sustaining a system which nobody really likes but which is better not disturbed. The distribution of authority over the holy places of Jerusalem is determined by the status quo of 1757, but is further complicated by the fact that that status quo is not determinate. That is tricky in turn because the League of Nations mandate given to the United Kingdom for the administration of Palestine included an obligation to preserve existing rights in the holy places. And so it fell to a British civil servant in 1929 to document what they actually were. The intersection of civil service prose, religious division and several centuries of assorted bickering is something to behold. A few sentences give a good sense both of the document and of the rivalries it captures:

The steps leading up to the Chapel of St. Mary’s Agony are Latin property. The question as to who was to clean the lowest step, which is barely above the level of the Courtyard, was in 1901 the cause of a sanguinary encounter between the Latin and Orthodox monks. The position now is that the Latins brush it daily at dawn, and the Orthodox at times together with the rest of the Parvis.

This is all utterly bizarre, but – within limits – it works. And in a decidedly odd way, it says something about the ways in which governments can create value, which have echoes in more conventional areas.

The second and broader thought is about the power of story telling and the power to determine which stories get told. The latter is related to – but far from wholly determined by – wider political power. That is always true, but it’s more obvious in this part of the world than most, perhaps because it is more extreme.

One example is the excavation of a tunnel along the line of the western wall in Jerusalem – the famously visible part is only a small proportion of the whole; much of the rest is buried behind centuries of later development and specifically by the Muslim Quarter of Jerusalem. It is valuable archaeology, but it is not neutral: it is an assertion of the deep-rooted Jewishness of the Temple Mount against the counter position that those same walls are an intrinsic part of the Haram esh-Sharif, the Noble Sanctuary. And it’s a quiet demonstration of who has the power to tell the story.

Another is the museum at Yad Vashem. It is a memorial to the victims of the holocaust, but it is also more than that. There is nothing in the facts of the story told there which is different from other accounts. What is unique and uniquely powerful is the perspective from which the story is told and its expression in the very fabric of the building. In quiet, remorseless detail, the message is not just that the suffering was appalling and incomprehensible and that every death was murder, but that nobody came to help. And that is, fundamentally, the case advanced for the foundation of the state of Israel: not just the return to an ancient homeland, but the necessary creation of a place of sanctuary. Both physically and metaphorically,that is the end point of the museum, the place where there is new light. It matters who tells the story. 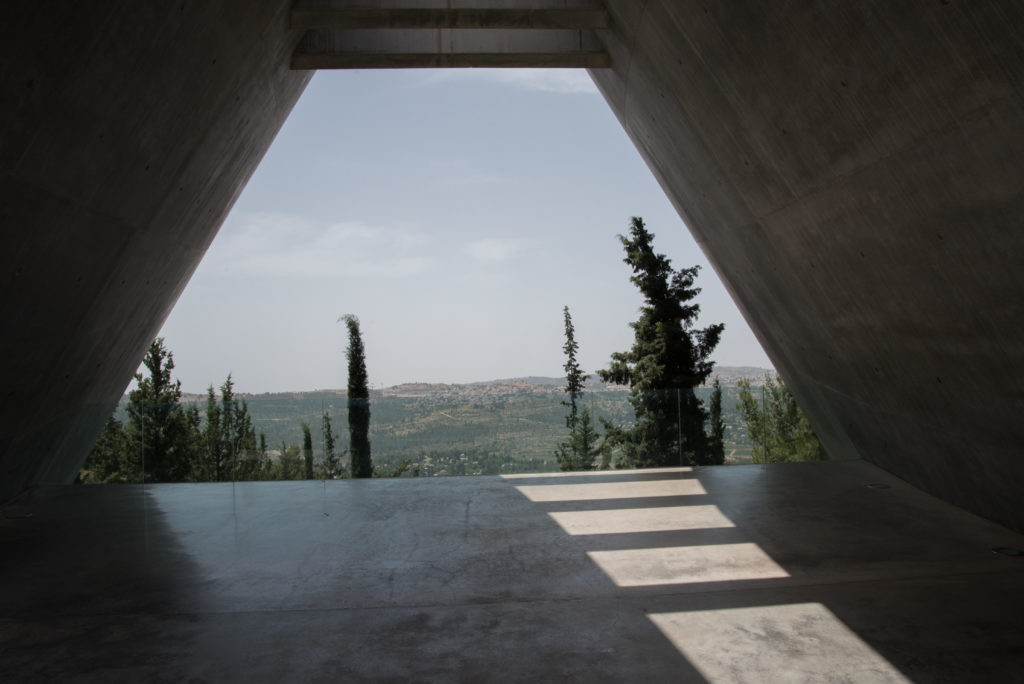