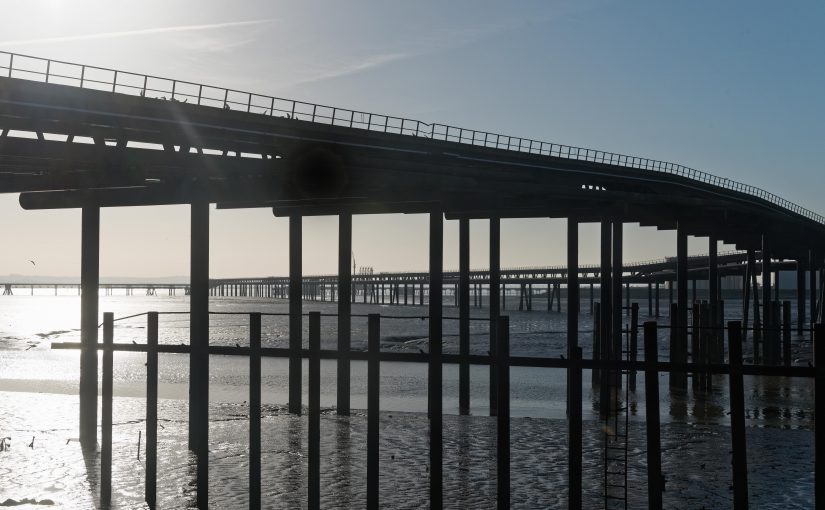 It all started when Paul Clarke went to Sheppey.

Been a bit busy of late, so took this afternoon off to make some stuff for me. And you, if you like. https://t.co/14iSTCiXd2

Actually, it didn’t quite start there, because Paul had been responding to a tweet from somebody else a day or so earlier, which had caught my eye too, but didn’t react to with quite Paul’s alacrity (and can’t now remember whose tweet it was).

Anyway, Paul went to Sheppey, and took some photographs, as he does. That in turn prompted a bit of twitter chat about the minor islands of Great Britain, including an arresting assertion from Tom Loosemore.

It had never occurred to me that I might ever want to go to Canvey Island. I had vague associations with oil refineries, flooding, and distant cousins, last heard of decades past. As is often the way with islands, it’s impossible to go there by accident, it’s not on the way to anywhere else (unless you have a predilection to hitch a ride on an LPG tanker to Russia). Against all that, ‘unmissable’ seemed a sufficiently unlikely endorsement to be well worth investigating.

So yesterday I took advantage of perfect weather, cold, still and clear, to look for myself. In the absence of any greater attraction, the obvious thing to do with an island is to walk round it. So I did – though on a short January day and a not very early start, 15 miles began to feel a bit like a competition with the fading daylight.

But before that, it was glorious. Strong, low sunshine. An absolutely clear sky, broken only by the vapour trails of planes stacking and converging on Heathrow. Walking on the sea wall – more of an earth rampart most of the way round – a few precious feet higher than the surrounding land. The Ordnance Survey does not grace Canvey Island with a single contour line – so impressive chutzpah to whoever got away with naming Canvey Heights Country Park.

For the first couple of hours, I didn’t see another person – except a couple of children with their dog over on the mainland, a hundred yards and an hour’s walk away. Towards Holehaven Point, the first few dog walkers appeared, before reaching metropolitan Canvey a couple of miles further on. This is where the flood defences get really serious – the length of what in any other riparian town would be the promenade, consists of a concrete path with an eight foot wall completely blocking off the town. There are occasional glimpses of nothing very interesting looking through the heavily-gated gaps in the upper part of the wall which allow access, but were it not for the dozens of benches memorialising deceased Canveyites and a greater incidence of dog walkers, the town might as well not have been there at all. The one structure which braves the seaward side of the wall is the Labworth Cafe, which I might have been more tempted to stop at had I realised that it is the only building designed by Ove Arup, when he was an architect not an engineering company.

Round the corner and out of the sun, the temperature drops to a sudden chill. The last third of the walk, back round the north side of the island is less dramatic and the low sun is starting to get even lower. A lone small cloud appears – the inverse of a sailor’s trousers – as the bridge to the rest of the world finally comes into sight and the sun sets over the oil refinery.

Click on any of the pictures to see full size versions. Or see the full set. 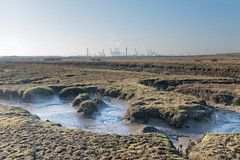 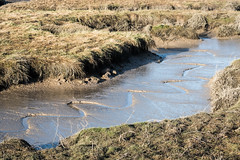 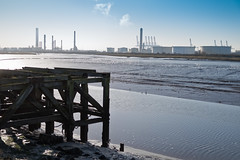 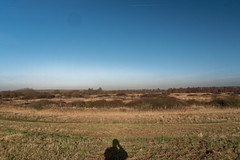 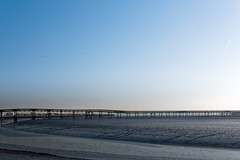 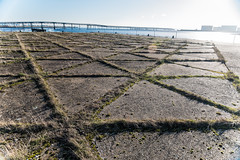 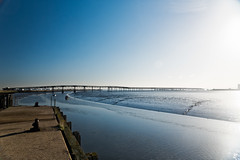 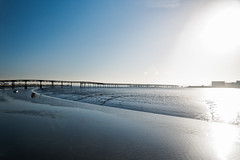 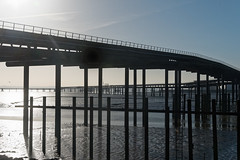 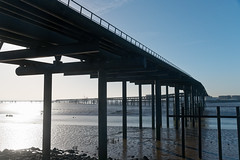 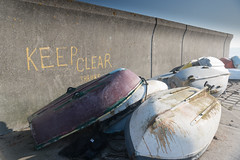 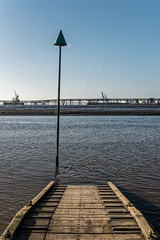 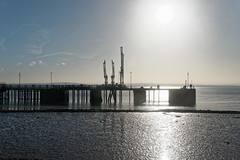 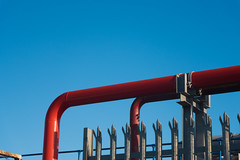 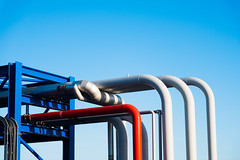 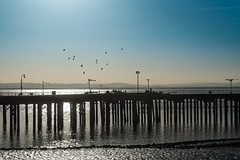 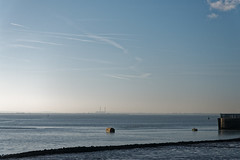 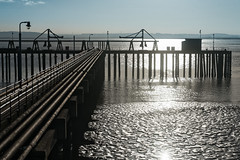 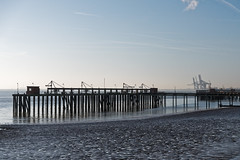 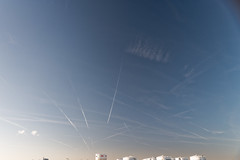 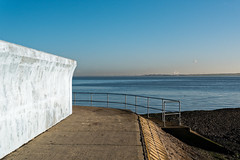 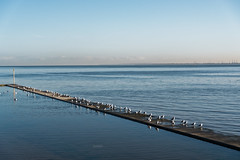 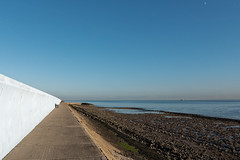 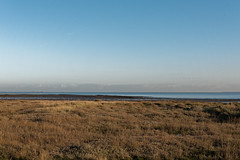 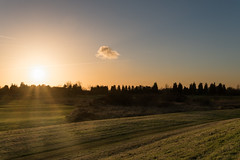 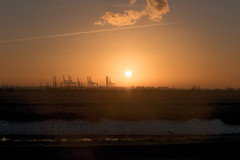